got into the habit of giving names to my computers long ago, once I learned how useful a recognizable identifier can be in a network setting.  I’ve named machines after Ansel (Adams), (Thelonius) Monk, Euclid and other figures that resonated with me for some reason.

One particular laptop, since retired, was called Utixo.

Utixo is not well known in Western culture.  He is the benevolent god of rain found in southwest Africa.   He brings water to the plains, announcing his arrival with a voice of thunder.

As I mentioned, that laptop is gone, but I’ve held on to a fondness for this foreign deity ever since I first learned about him.  As with so many things I do, I didn’t realize I was creating my own interpretation of him until I finished, and stood back to look at it. 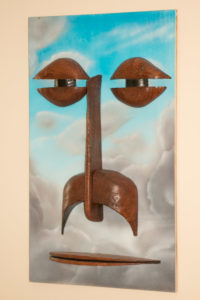