Here’s a small stool made from scraps of pine, fir, and a dash of walnut.

There is something particularly satisfying about using up material that many people would toss into the waste barrel, or perhaps the woodstove. 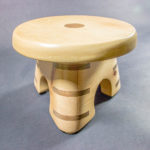 The thing here is the geometry.  The triangular base is simplicity itself, although laying it out was anything but.   The walnut splines presented a choice: parallel to the horizon or perpendicular to their respective corners.  The former would have been easier to accomplish, I think, though I opted for the latter.  It’s indeed a luxury to pay that much attention to such a trivial detail.  Nonetheless, I think it’s the right choice.

The seat is attached in the following way: the interior of the base is a simple three sided pyramid.  I cut a piece to fit inside that exactly contacted all three sides perhaps .030″ before if came flush with the top of the base.  Screws through that piece and into the underside of the top clamped it solidly together.  Glued as well, of course.  I believe it would support an elephant.

It’s a luxury, and I am thankful.