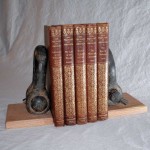 These old shackles probably should have been retired long before they reached this level of wear.  On the other hand, their extended service has given them a look that the most creative of ‘distressing’ efforts could never match. 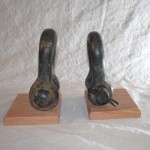 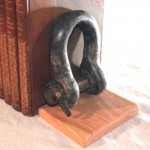 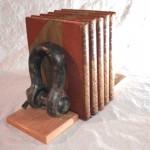 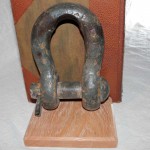 I admit that turning these shackles into bookends is one of those things that borders on the corny cliche.

Still, they’re cool old things.  I feel a sort of defensive respect toward them; I’d feel bad just scrapping them.  At the same time, I couldn’t resist the (quite small) challenge of coming up with a sturdy, invisible method of attaching them to their bases.

This was accomplished by making a temporary fixture to hold them, upside down, at an angle that allowed the top and the eye of each shackle to bear equally against a vertical book.  After that, it was a simple matter to drill and tap for a 1/4″ bolt, and assemble the pieces.  A little finishing alchemy, and done.

I mention this bit of construction detail mostly because it bugs me a little when I see someone make a similar sort of thing, held together with hot melt glue, then rave about their industrial-punk, machine-age sensibility.  I’ve moused the pin in more shackles than I can remember, with life and limb literally in the balance.  ‘Industrial’ is personal to me, and not just an aesthetic fashion.

Return to: Bits and Pieces