A box of my old notebooks passed through my hands recently. The pages were filled with thoughts and impressions in the form of words and images. Most had lost whatever had made them originally worth committing to paper, and I had no hesitation at tossing them, notebook after notebook. 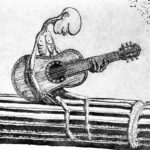 I found this sketch of a broken soldier among the pages.  I remember making it, even though it must have been a thousand years ago.  The notebooks had gotten wet.  They were stained and mouldy, and there was no saving them, even if they had been filled with the lost knowledge of of Atlantis.  But I remembered this sketch and took a photograph before letting it go.

It’s almost like found art to me, in the sense usually applied to the term- a found object that becomes an ‘art object’ by re-stating either the object itself or the context that we see it in.  And so it is with this sketch. The original is gone, and after re-working the photograph, it’s a new thing.  It’s become something else.

Since writing this, additional drawings have found their way back to me.  I’ve included them in the gallery.

I’m very excited to think that I’ve discovered a new way of seeing things, at least for me. It had been my hope to find new images among my old photographic negatives, but I was assuming that the discovery would come about mostly by applying digital techniques to analog images.  In reclaiming this sketch, though, I realize there’s something else at work entirely.