I first heard the expression ‘the old future’ when my daughter was about 14 years old.  We were driving, and as we approached an intersection, we were presented with a splendid view of a nice old Airstream trailer cruising by.  “Isn’t that a cool thing?” I said.  “Yeah,” she agreed, “It looks like the old future.”

This is an Osborn jolt-squeeze molding machine, Model 275.  I finished rebuilding it one day last year, and was about to send it back to its spot on the foundry floor, where it would again become hidden under layers of black sand, sentenced to years of obscurity, possibly a life sentence.

I paused, and rolled it to a well-lit spot with a plain background and photographed it.  As so often turns out, the background was hopelessly un-photogenic after all.  Eventually, experimentation resulted in the background being edited out completely.  After some more this and that, I adapted a desert scene for the background.

I looked up ‘old future’ in the course of writing this, and sure enough, it’s a concept shared by others, although I don’t think my daughter was aware of this retro-ironic movement when she said it.  I think she was just saying that the Airstream didn’t fit her vision of the future no matter how futuristic it looked; it was part of my future, perhaps when I was her age.  It’s a bit of a struggle to accept that the future ages along with the generation that envisions it.

I don’t think the designers of this Osborn cared what future generations of critics would think  of their machine or their sense of style.   They weren’t interpreting the future; they were working in the present.  I admire this machine for its lack of pretense.  And. like the Airstream, it still has utility and value in the present day, aka the future.
Astute observers of mechanical minutiae will notice stray clamp half way along the hose.  I put it where it belonged and tightened it before rolling the machine across the way and into obscurity. 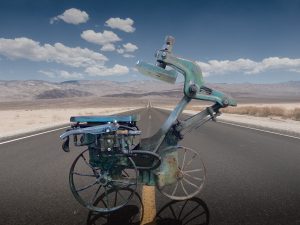