This image might seem like a fantasy created  in Photoshop, but I captured this scene with my Canon A550, pretty much as it appears.

For reasons I can’t explain, I never got around to adjusting the camera’s built-in calendar, so the date recorded in the image file’s metadata is an improbable January 1, 1980.  The probability of that being the correct date is very low, considering that the A550 wasn’t introduced until 2007.

For other reasons, also inexplicable, I have no idea where I was when I took the photo.  This leaves me with vaguely troubling feeling about it, reminiscent of those times when you try to recall a dream from the night before, and the harder you try, the more surely it recedes into the fog. 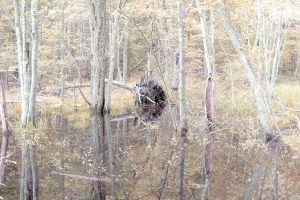