I worked several years for a shellfish company in New Haven.  I was hired as a captain, and I operated a number of boats for them, clam boats primarily, from fifty-five to a hundred feet in length.  The boat in this anecdote  was the Ada C. Lore, about 90′ as paced off on the dock  If you do a Google search, you’ll find stories and photos of her post-retirement life as a restored charter schooner in Maine, but when this story happened, she was was a just a tired old clam boat.

She was built as a schooner in the 1920’s, but when I was on board she was powered by a Detroit Diesel 6-110, an engine that at that time had been out of production for 30 years, and had been neglected for far longer than that.  The sailing rig was long gone, replaced with a steel mast that doubled as the exhaust stack for an 8-V71 pump engine.  There were a pair of booms, both on the starboard side, for handling the clam dredge.

She needed a ton of work, but still had handsome lines- low freeboard and a graceful sheer, hogged by age.  Her original aft deck house was still there, but someone had cobbled a coarse, square wheelhouse on top of it, barely tall enough for me to stand up straight in.  It was actually a pretty cozy spot to pass a couple of years of my life, but it didn’t belong on that boat.

Here’s a photo I took while standing on the opposite side of the Quinnipiac River.  It was at the end of the day, after she was unloaded and tied up.

I took the time to cross the Grand Ave bridge, get out of the car and walk down to the river’s edge to take this picture.  Most nights, I simply went home.

For the two years that I ran that boat, there was always vague talk of a major overhaul, so repairs were made only if they were needed to keep the boat fishing.  Consequently, I worked through most of that particular winter with a broken radar, a faulty depth sounder, a compass and a Loran (GPS hadn’t taken over yet).  Clamming is an inshore fishery in Connecticut, so rudimentary navigation equipment is adequate to catch clams.  On the other hand,  Long Island Sound is a busy and changeable body of water.  Conditions, including visibility, can change very quickly, especially in the winter.  In the summer months, the Sound is crowded with amateur boaters, but heavy commercial traffic continues year-round, with tugs, barges, tankers and ships steaming to and from New York, and frequently coming in or out of New Haven Harbor.  Without radar, you can quickly find your comfort zone a little less comfortable.

So, that morning, I left the dock a little before six.  It was dark and a bit hazy, but I could see what I needed.  If it was a thick fog, I could have stayed in and the owners wouldn’t have complained too much, but I headed out.  Anyway, another boat was headed out at the same time, and I could follow the leader, if need be.  At that time there were 3 or 4 other company clam boats working out of New Haven, and two privately owned clam boats.  I got along well with most of them.  When I hired on, several people warned me that the captain of the Clueless (I’ve altered the boat’s real name.) was a company fink- bringing the least scrap of trouble to the boss to gain favor.  I reserved judgement, however, until he proved it to me.  He was very pale, very fair, and was known as the white rat.  Part of his duty was to drive a van filled with deckhands from Norwalk every morning, so I was gone before he even got to New Haven that morning.  I had planned to fish a spot about eight miles from the dock- out the harbor and little past the end of the West breakwater.  At that location, I figured I could grope my way home if the fog closed in, and wouldn’t need to worry about tugs getting too close.  Loran is a clumsy navigation technology compared to GPS.  Its read-out consists of two rows of 6-digit numbers, which had to be manually plotted onto paper USCG charts that were overprinted with Loran lines, presenting a sort of gently curving grid.  Accuracy, no better than a hundred feet, depended on your ability to translate numbers to points between lines; not difficult as a classroom exercise, but not fun while trying to steer a boat through the fog or in rough conditions.  Once I reached my target area, I tossed a couple of working buoys over the side just to make staying put a little easier.

A funny thing about clamming is that if you find a productive spot, you can work it for a month, even though it might seem to be only as big as a basketball court .  That was the kind of spot I picked out for that day.  I’d discovered it weeks ago and noted its Loran numbers and visual range sightings.  I made a practice of scouting out new grounds on nicer days, and had a notebook full of possibilities.  Once my working buoys were out, the day became a matter of routine: launch the dredge, tow the dredge, empty the dredge, repeat until there was a reason not too.

I stayed in the wheelhouse for the most part.  Most days, there was a rhythm that would allow me to go on deck and help sort clams if I wished, but I had two good deckhands on that boat, so I spent that time doing other things.  My job was to tweak the boat back on station as we circled the buoys, and to operate the controls to bring the dredge up and down all day long.  It may sound tedious, and in a way it was, but it was satisfying work.  It was simple, with a timeless quality to it.  I do miss being on the water.

Some time before three o’clock, I heard the white rat tell someone over the radio that he was heading back to the dock.  It was a little early, but by then the fog had clamped down pretty hard, and I wasn’t looking forward to the trip back in.  I had been hearing radio chatter all day, and I knew the Clueless was working to the West, and so would be passing right by me.  I picked up the microphone, told him my radar was out, and asked if he’d mind that I follow him in.  To my permanent astonishment, he said no.  He had to get back to load the truck, he said, and didn’t have the time.  I’m still astonished.  Keep in mind that the Ada is a 30 ton vessel, and there’s active tug traffic despite the fog, not to mention the risk of running aground.  If I didn’t think I could safely find my way back, I wouldn’t have ventured out, so I wasn’t counting on him.  Still, it would have been a friendly thing to do, the right thing.  A normal person would instinctively help out, but not the white rat.

Regardless, I called down to the deckhands to get the dredge on deck with all haste, and I prepared to follow him in even if he wasn’t going to slow down for me.  I could actually hear him go by, and he could easily see me on his radar, so he knew what he was doing.  I pushed the throttle forward, and a few minutes later crossed his wake, and knew I was behind him.  I still couldn’t catch sight of him through the fog.  Sort of simultaneously, I checked the time on my watch, swinging on a hook above the compass, and fumbled through a notebook.  It was my practice, if I were put in charge of a boat for any length of time, to note the compass error, and write down headings and elapsed times (at several engine speeds) for courses I commonly followed, including New Haven Harbor.  At the moment, I was close enough to the west end of the west breakwater to use that as my starting point.

Down on deck, the guys were contentedly cleaning up, and I strained to catch a glimpse of the Clueless.  By then I had worked out the time that I should encounter my first channel buoy.  Time went by, and I couldn’t find the Clueless.  His wake was no longer visible.  His boat was a little slower, so losing him was both puzzling and unsettling.  Nonetheless, I obeyed my watch and compass, and was eventually rewarded with a channel marker materializing out of the fog just off the bow.  After that, my notes led me right to the dock.  Some days were more interesting than others, and I was glad that one was over.

I didn’t see the Clueless, but didn’t think anything of it.  The company had a dock on the Mill River, and another on the Quinnipiac.  Once you passed under the I-95 bridge, The Mill was left, and the Quinnipiac was right.  I tied up a the Quinnipiac dock, and was just as happy not to even see the white rat.  I went home to my family to do whatever I did that night.  The next day, I found out that the white rat had missed that first buoy, and had run inside the old breakwater parallel to the main channel.  He’d crashed the Clueless hard onto the old jetty.  He was too humiliated to radio for help, I guess, and he had pushed and backed as hard as he could until he tore free of the rocks.  He had damaged the hull and was leaking badly, and just made it back to the dock before his engine went under.  The Clueless was out of commission for weeks.

So that’s the story.  On one hand, this tale might seem baldly self serving – presenting myself as an underdog hero, rising above an unworthy rival.  On the other hand, this little vignette really did happen, pretty much as I’ve related it.  And it does serve to illuminate several aspects of my take on life.

First, I expect things to go wrong.  I’m not surprised that fog appears and electronics fail.  The white rat’s refusal of assistance was surprising, but only because I didn’t know him that well yet.  I like being prepared, even if it takes extra time and effort.  Right now, for instance, I’m fully prepared for breakfast, and my cell phone is mostly charged.  There are things beyond my control, though, just like everybody else.

The other moral of the story has to do with karma.  Without getting too deep, I’ve learned that doing the right thing is usually worth what might seem like a sacrifice at the moment.  In this case, white rat made his choice, and his life followed its course.  It may not always be possible to prove cause and effect, but one’s own choices certainly can affect how comfortably one lives with the ensuing consequences.

Update:   After being restored in 1999, The Ada C. Lore was used for some time as a coastal charter ‘tall ship’ in Maine, until the freak collapse of a breakwater damaged her in Eastport, Me. Subsequently, she was acquired by a new owner who at, this writing, seem to be trying to raise funds for repairs. The photos below show her happily underway as a charter vessel, and in the repair yard after the seawall collapse.  As to her current fate, I don’t know any more than you. 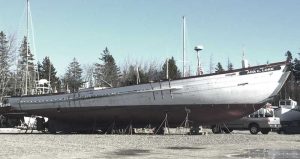 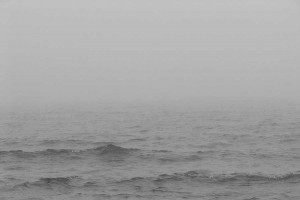 Return to: About Me